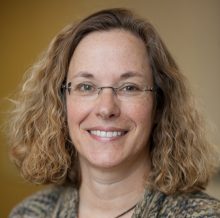 Dr. Ranum began her research career in human molecular genetics in 1989 at the University of Minnesota and is currently the Founding Director of the Center for NeuroGenetics and Professor of Molecular Genetics and Microbiology at the University of Florida. Over the past 25 years her laboratory has identified the mutations for a number of neurological disorders including spinocerebellar ataxia types 5 and 8 (SCA5, SCA8), and myotonic dystrophy type 2 (DM2). Her laboratory has developed and uses mouse models to understand how these and other mutations cause disease.  Most recently, the Ranum lab created a mouse model of the C9orf72 ALS/dementia mutation that has generated wide interest in the scientific community studying ALS.

A common feature of several of these diseases is that they are caused by genetic mutations in which letters of the genetic code (e.g. CAG or CTG or CCTG) are repeated too many times. Over the years, work on SCA8 in the Ranum lab has led to two discoveries that have changed our understanding of how these microsatellite expansion mutations are expressed.  First, they demonstrated that expansion mutations can be expressed in two directions. This means there are often two genes to worry about instead of one (Moseley et al., 2006). More recently, they discovered that a cellular traffic light that scientists thought provided a critical signal required for cells to make proteins does not apply to expansion mutations. These mutations cause the protein-making machinery of the cell to run molecular “red lights,” producing up to six unexpected proteins that can accumulate in the brains of patients. The technical name for these proteins is Repeat-Associated Non-ATG, or RAN, proteins (Zu et al., 2011).  These discoveries have taught us basic lessons about how genes work, and have paved the way for similar discoveries in other diseases. Bidirectional gene expression and RAN proteins are now thought to play a role in more common diseases, including ALS and dementia.

Many neurodegenerative diseases begin later in life after the nervous system is fully developed. A major step towards a better understanding of neurodegenerative diseases was made with the discovery that microsatellite repeat expansions are responsible for a large group (>30) of these diseases. In these disorders, extra copies of short DNA repeats (e.g. CTG•CAG or CCTG•CAGG) cause disease. In general, these mutations are thought to cause disease by protein loss-of-function, protein gain-of-function or by RNA gain of function mechanisms. My group uses human genetics to define the molecular causes of neurological disorders and mouse models to understand how these mutations cause neurons in the brain to die.

Current research in the Ranum lab focuses on the role of Repeat Associated Non-ATG  (RAN) translation, RNA gain of function and protein gain of function in repeat expansion disorders including amyotrophic lateral sclerosis (ALS), spinocerebellar ataxia (SCA) types 5 and 8, myotonic dystrophy (DM) types 1 and 2 and Huntington’s disease (HD).  We are investigating the mechanism by which RAN translation occurs in these diseases and the toxic effects of RAN proteins on the brain and other organs.  We have shown that RAN proteins accumulate in brain tissue from patients diagnosed with SCA8, ALS and Huntington’s disease and are using mouse models of these diseases to better understand the impact of these proteins and to develop therapeutic strategies.  Additionally, the Ranum laboratory continues to search for novel human disease genes.  We are using high-throughput sequencing strategies to look for single-gene mutations that cause novel forms of ataxia, ALS and neuropsychiatric diseases.  Because RAN translation has now been shown to occur across multiple diseases, and greater than 30 diseases are caused by repeat expansion mutations, these studies are likely to contribute to the understanding and development of urgently needed therapies for a large category of diseases. Scientific breakthroughs made in the Ranum laboratory over the years have depended on partnerships with talented scientific colleagues and students and with members of the community that have participated in our research studies. Although there is much work that remains, scientific advances have dramatically increased opportunities for drug development and clinical trials. The goal of the Ranum laboratory is to perform cutting edge research that will lead to improvements in diagnosis and treatments for neurological and neuromuscular disease.  A more detailed looked at research in the Ranum lab is outlined below.

RNA gain-of-function in SCA8 and DM: In 1999 we discovered that a novel form of ataxia, spinocerebellar ataxia type 8 (SCA8), is caused by a CTG•CAG expansion mutation (Nature Genetics 21:379-384). In 2001 we showed that a second form of myotonic dystrophy (DM2) is caused by an intronic CCTG•CAGG tetranucleotide expansion (Science 293:864-867). These discoveries and additional work by others have established that CUG/CCUG expansion RNAs dysregulate alternative splicing pathways. To understand the impact of these expansion mutations on the central nervous system (CNS) we developed SCA8 and DM mouse models (Nature Genetics 38:758-769, 2006). Our SCA8 mice showed, for the first time, that CUG expansion transcripts cause RNA gain-of-function effects in the brain and that relatively short expansions (~100 repeats) are sufficient in length to effect these changes (Plos Genetics 5:e1000600, 2009). We are currently characterizing our DM and SCA8 mice using a combination of molecular and in vivo optical-imaging strategies to determine if specific alternative splicing changes caused by CUG and CCUG expansion transcripts lead to neuronal phenotypes.

Bidirectional expression of expansion mutations: A second discovery my group made in SCA8, was that the CTG•CAG expansion mutation is bidirectionally transcribed and in addition to CUGEXP transcripts the expansion mutation also produces CAGEXP transcripts that expresses a polyglutamine expansion protein. Both polyGln aggregates and CUG-containing RNA foci accumulate in cerebellar Purkinje cells, which are a primary site of neurodegeneration in the disease. The expression of noncoding CUGEXP transcripts (ataxin 8 opposite strand, ATXN8OS) and the discovery of intranuclear polyglutamine inclusions expressed from ataxin 8 (ATXN8) CAG transcripts suggested SCA8 pathogenesis involves toxic gain of function mechanisms at both the protein and RNA levels. It is now clear that much of the genome and a growing number of expansion loci including the DM1, FMR1, HD, HDL2, SCA7 and C9orf72 ALS/FTD expansion mutations are bidirectionally transcribed raising the possibility that both sense and antisense transcripts contribute to a broad group of neurological diseases.

Repeat Associated Non-AUG Translation (RAN Translation): In 2011 we reported that the canonical rules of translation do not apply for CTG•CAG repeat expansions and that CAG and CUG expansion transcripts can express homopolymeric expansion proteins in all three frames without an AUG start codon. We showed that this repeat-associated non-ATG (RAN) translation is hairpin dependent, occurs without frameshifting or RNA editing and is observed in cell culture and SCA8 patient tissues. Additionally, we showed a novel RAN proteins accumulate in both SCA8 and DM1 patient tissues. As expected our 2011 discovery of RAN translation was highly controversial because it went against the established dogma. For more than two decades the position of the expansion mutation, within or outside an ATG-initiated open reading frame (ORF), provided the framework for research into the molecular consequences of these mutations. The discoveries of bidirectional transcription and RAN translation highlight the need to test therapeutic strategies that target both sense and antisense transcripts as well as RAN proteins. In 2013, additional studies by our group and others in C9ORF72 ALS/FTD have demonstrated that both sense and antisense RNA foci and RAN proteins expressed from all six reading frames accumulate in patient autopsy tissue. RAN proteins have also been reported in the CGG expansion disorder fragile-X tremor ataxia syndrome (FXTAS). We are now addressing a number of provocative questions that this discovery raises including: 1) How does this novel translational initiation mechanism work? 2) Is RAN-translation a key, previously unrecognized, pathogenic mechanism in neurologic disease? 3) Are other repetitive sequences in the genome translated into proteins and if so, what is their function?

Spectrin mutations in SCA5. My lab is also involved in the discovery and characterization of other types of novel gene mutations. In 2006 we showed spinocerebellar ataxia type 5 (SCA5), is caused by mutations in the spectrin beta non-erythrocytic 2 (SPTBN2) gene (Nature Genetics 38:184-90, 2006) which encodes the β-III spectrin protein. We recently developed novel mouse and fly models of SCA5 to better understand how SBTBN2 mutations affect protein function and to model the human disease. Additional studies focus on understanding how mutations in SPTBN2 alter cellular function and cause disease.