Innate immunity is a defensive program that animals are born with to fend off intrusion of pathogens or deleterious (cancer) cells. Unlike adaptive immunity, innate immunity evolved earlier and is much more broadly conserved.  Studies conducted in the model organism D. melanogaster led to the discovery of key components and mechanisms important for our understanding of innate immunity in humans, which was recognized by the 2011 Nobel Prize in Physiology or Medicine.

Innate immune response is essential against pathogen infection.  However, chronic activation of innate immunity in the absence of infection is often associated with advanced age and referred to as inflammaging. Inflammaging is implicated in many age-related diseases. The mechanism of inflammaging is still a subject of debate. One of the leading theories suggests that degradation of epigenetic control has led to the misfiring of innate immune genes. Our laboratory discovered that human alpha anti-trypsin (hAAT), an immune modulator with a strong anti-inflammation effect, potently suppressed inflammaging in Drosophila when expressed from the fat body (analogous to the liver). Follow-up RNA-Seq analyses indicated that the same innate immune pathway is suppressed by hAAT in senescent human HCA2 cells and aging Drosophila (Yuan et al 2018). 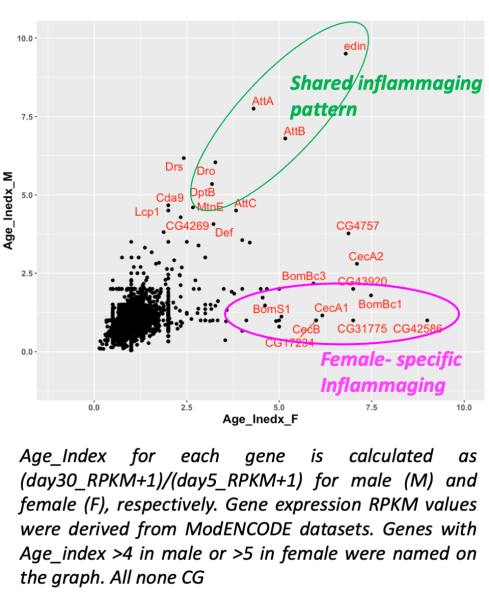 In both Drosophila and humans, elevated expression of innate immune genes is a hallmark of aging. Our analysis of transcriptome data from Drosophila indicated that there is sexual dimorphism in inflammaging. A group of innate immune genes are only elevated in aged females but not in males.  This is interesting as it is well known that women account for 4 out of 5 patients with autoimmune diseases.  The cause of this divergence in susceptibility to autoimmune disease remains enigmatic. We believe that revealing the mechanisms underlying the sexual dimorphic inflammaging in Drosophila will shed light for us to understand why women are more susceptible to autoimmune diseases.

Innate immunity is also the primary sentinel against the infiltration of cancer cells.  However, innate immune cells, such as macrophages, can also be subverted by tumor cells to help evade the immune response and promote metastasis. Channeling innate immune cells for anti-tumor activity holds great promise for treating cancers and preventing metastasis. However, the multifold complexity associated with the interaction between macrophages and tumor cells has been daunting. We have developed a series of models which enable us to investigate the interplay between innate immunity, female-specific inflammaging, and cancer metastasis.

Mosquito-transmitted infectious diseases cause millions of deaths each year, with a large portion of the victims being children.  Genetics research in Drosophila revealed that a group of IAP-antagonist genes, reaper, hid, grim, and sickle, play a pivotal role in regulating programmed cell death in insects.  Using advanced bioinformatics strategies, we identified several reaper/grim-like genes in mosquito genomes (Zhou et al 2005). Interestingly, these genes are transcriptionally activated within an hour of viral infection to mediate a rapid induction of apoptosis (RIA) within infected cells (Liu et al 2011). 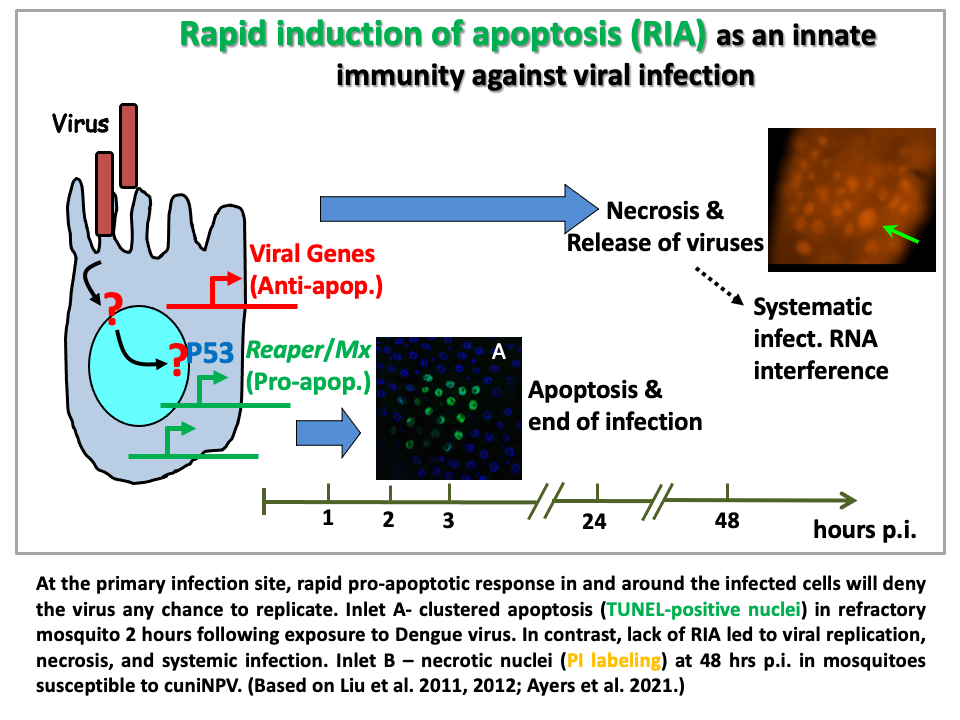 An organism’s susceptibility to viral infection inversely correlates with its cells ability to commit apoptotic suicide at its primary infection site. Rapid and robust induction of Mx (ortholog of reaper) and apoptosis in primary infected cells is associated with strong resistance to viral infection.  In contrast, a delayed or timid pro-apoptotic response correlates with viral proliferation in infected cells, leading to necrosis and further viral dissemination (Liu et al 2011; 2013, Ayers et al 2021). Interestingly, RIA following viral infection has only been observed in live animals challenged with viruses.  Our examination of insect cell lines, as well as works from other labs, failed to show any recapitulation of this process.  Using Drosophila as the model, we showed that RIA is mediated by P53 (Liu et al 2013). Recently, we obtained evidence indicating that RIA is indeed responsible for mediating resistance to the medically important Dengue and Zika viruses in the mosquito vector Aedes aegypti (Ayers, 2021). This helps to explain why different populations (strains) of vector mosquitoes exhibit significant differences in their ability to transmit viruses. We anticipate this knowledge will help predict the susceptibility of mosquito populations and thus allow more efficient control of mosquito-borne diseases.

Bioinformatics approaches have always been an integrated part of our research.  Using advanced bioinformatics strategies, we have 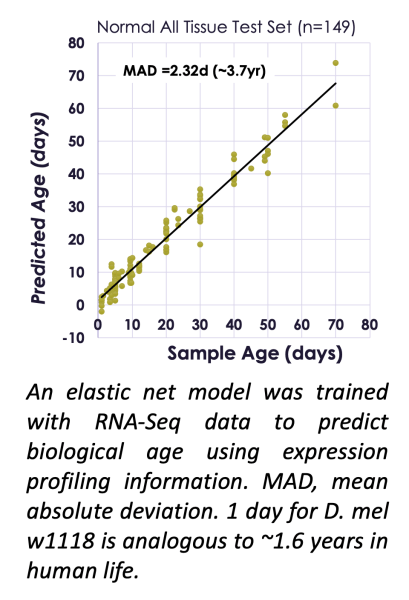 identified divergent pro-apoptotic genes (Zhou 2005), developed a novel strategy to identify conserved regulatory modules (Meng et al 2006; 2007), and mined cancer exome data to identify genes important for lung cancer (Sundaresan 2017).  Among the current projects in this area are the use of machine learning to estimate biological age with RNA-Seq data, and the development of a knowledge database for cross-genome comparison of serpins.